Citizen is currently the largest Watchmaker in the world, and the brand’s experience with Watchmaking is demonstrated by the multitude of models they offer and the standardized excellence they’ve employed across the company. Offering generally mid to high end timepieces, one would be hard pressed to find any unhappy customers.

as an energy source. Both natural and artificial light are absorbed through the front dial, resulting in a watch that is “Unstoppable.” The Stiletto, released in 2003, is the world’s
thinnest light powered watch with this technology. Other famous watches include the Cryston Mega Quartz, Launched in 1975, which is one of the most expensive and accurate watches ever offered to the public to this day. Check this article for a profile of some of the most popular retail models currently available.

Citizen was started in Japan in 1924, and garnered the brand name from its first item for sale: the Citizen pocket watch. The name was bestowed by the mayor of Tokyo, who hoped that the item would be available to all citizens and class levels and eventually sold throughout the world. (Quite a prediction!). Popularity of the Citizen fueled the company’s growth, and the company went on to create new lines and models throughout the century. 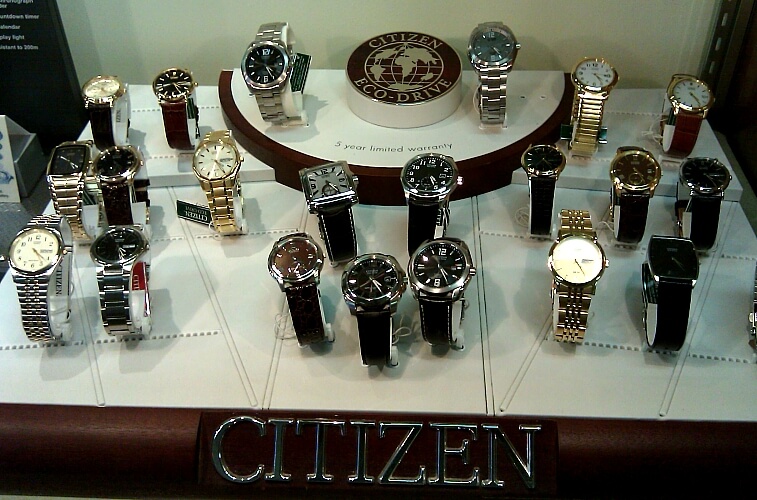 In 1956, Citizen produced Japan’s first shock-proof Japanese watch, aptly named the Parashock. The company quickly followed up with the first Japanese water-resistant watch called the “Citizen Parawater” in 1959. Revolutionary models from the 60s include the “Diamond Flake” in 1962, the world’s thinnest wrist watch with center seconds, and the “Cosmotron” in 1966, Japan’s first electronically regulated balance wrist watch.